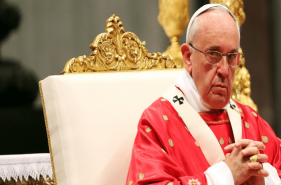 Calls Grow For Pope Francis To Resign Amid Scandal!

A new day and a new story about Pope Francis. Now calls are increasing for the Pope to resign!  It's nearly unprecedented for a Pope to resign or be removed from office -- I suppose that's

A new day and a new story about Pope Francis.

Now calls are increasing for the Pope to resign!

It’s nearly unprecedented for a Pope to resign or be removed from office — I suppose that’s if you don’t count the circumstances around the prior Pope’s very bizarre short tenure in office.  Read more about that below.

But now the scandal is growing, with many insiders claiming it goes right to the very top of the Vatican! The Catholic Church is reeling after a grand jury report in Pennsylvania found that possibly more than 1,000 children in six dioceses had been sexually abused by about 300 priests or higher ranking officials.

On top of that, the report said that bishops and other top church officials had tried to contain the public outcry and liability by covering up the crimes, which Pennsylvania Attorney General Josh Shapiro claimed “went all the way to the Vatican.”

But the report, and the Vatican’s subsequent tepid response, has exposed a split within the Holy See which threatens to bring down Pope Francis just five years after he replaced Pope Benedict XVI.

Several days after the news broke and dominated U.S. headlines, the Vatican released a statement. Using uncharacteristically strong language for the Vatican, even on such serious issues as child abuse, the Holy See spokesman said to victims that “the pope is on their side.”

Vatican spokesman Greg Burke said the incidents of abuse graphically documented in the grand jury report were “betrayals of trust that robbed survivors of their dignity and their faith.”

“The church must learn hard lessons from its past, and there should be accountability for both abusers and those who permitted abuse to occur,” he said.

POPE’S ALLEGED COVER-UP PIVOTS ON WHEN, IF SANCTIONS IMPOSED

But for many Catholics and long-time Vatican observers, the acknowledgment of the criminal behavior was too little, too late.

The Freedom From Religion Foundation, a group that describes itself as agnostics and atheists (including former Catholics) are running a full-page ad later this week in The New York Times urging people to leave the Church.

“Priests were raping little boys and girls, and the men of God who were responsible for them not only did nothing; they hid it all,” the ad says. “Six dioceses, three hundred predatory priests, a staggering 1,000-plus victims. No bishops indicted. The pope’s response? All words, no action — except, insultingly, to call on the faithful to ‘pray and fast.’”

Pope Francis told reporters Sunday that he “won’t say a word” about claims by a former Vatican ambassador to the U.S. that the pontiff had rehabilitated the former archbishop of Washington, Theodore McCarrick, despite being made aware of sexual misconduct claims against him.

In an 11-page memo made public Saturday evening, Archbishop Carlo Maria Viganò called on Francis to resign over his handling of the McCarrick matter. The most eye-opening claim by Viganò was that Pope Benedict XVI had sanctioned McCarrick in 2009 or 2010 — in essence prohibiting him from public ministry and ordering him to carry out a life of prayer and penance — only for Francis to re-instate him, “cover” for him and advance him to the role of a “trusted counselor.”

Returning to Rome from a two-day visit to Ireland, Francis said that he had read Viganò’s memo and thought it “speaks for itself.”

Francis accepted McCarrick’s resignation as cardinal last month, after a U.S. church investigation determined that an accusation he had sexually abused a minor was credible.

Please vote in our new Poll:  Should Pope Francis Resign or Be Removed from Office?